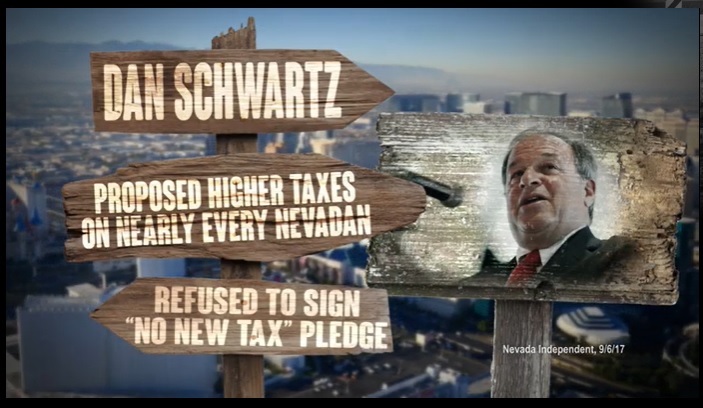 “Clout Research conducted a survey of likely GOP Primary voters in Nevada’s Third Congressional District regarding the upcoming race for the GOP nomination for Congress.  The telephone survey was conducted June 5-6, 2020, and included interviews with respondents reached on both landlines and mobile phones. The survey carries a confidence interval of 95% and a margin of error of +/- 4.22 percentage points.”

Some highlights for the two leading GOP candidates in the primary…

“Little Dan” Schwartz has the mirror opposite: 30% favorable / 49% unfavorable.

Not a very good return on investment for the $579,448.61 “Little Dan” reports lending to his campaign.

The good news for Schwartz is that if he actually does get 17% of the vote, that’ll be 8 percentage points higher than what he got in his failed GOP primary for governor against Adam Laxalt in the 2018 election.

In his first run for Congress in the 2012 GOP primary, Little Dan came in fourth with just 11% of the vote.  Heck, even Ken Wegner beat him by double digits!

He then won his general election race for State Treasurer – after running unopposed in the GOP primary – in the “red wave” election of 2014.

Then again, so did pretty much every other Republican.  Remember, Democrat turnout was so bad that election cycle that their gubernatorial candidate actually lost in the primary to None of the Above!

And Schwartz still only got 51% of the vote that year.  So…not exactly an electoral colossus.

The fact is, “Little Dan” is not a conservative.  He’s an establishment Republican in the mold of Mitt Romney.  And GOP primary voters know it.  That’s why he’s lost each primary he’s been in BIG TIME.

Tomorrow won’t be three time’s the charm.  It’ll be three strikes, you’re out.