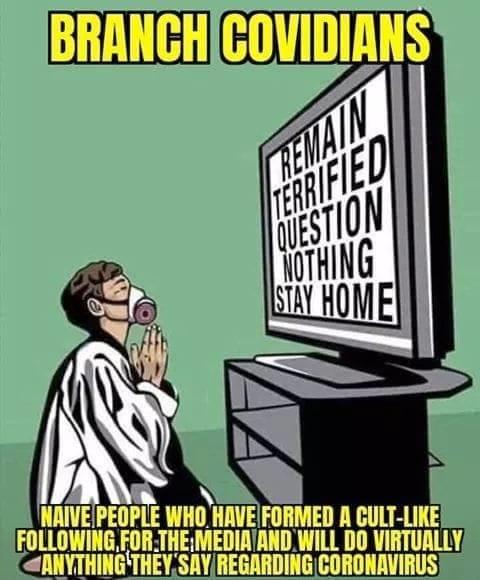 Branch COVIDians on the March…Again (Still)

Clark County Commissioners are on the verge of re-issuing a mandatory mask mandate countywide…including for folks who have already gotten President Trump’s anti-COVID vaccine.

“Because the vaccines are now widely available to all who wish to receive one, it is clear that those not vaccinated have decided to take their chances. We here in Vegas understand all about taking chances. Some win and most lose, but that is why they call it gambling. Good luck to them.”

If only such sentiment prevailed.

But political COVID cultists – seeing the virus as a means to attaining the authoritarian/socialist nirvana they salivate over – ain’t having it.  On the same LVRJ page, William T. Childs outlines the dystopian paradise he and his ilk envision…

“It is time for our state government officials to declare the unvaccinated a public health nuisance and mandate shots. If they would require proof of vaccination for major public events; bus, train and air travel; and entry to casinos, the shot-resistant would line up pretty quick.”

Be afraid.  Be very, very afraid.

The Cleveland Indians succumbed to Toxic PC and decided to change the name they’ve been playing under since 1915.

The club started with a list of 1,200 alternatives.  Spent 140 hours interviewing community leaders.  And conducted a survey of 40,000 fans.

In the end they went with…Cleveland “Guardians.”  Oy.

Bob “Jusssst a Bit Outside” Uecker was unavailable for comment.

On Tuesday, the CCRCC was supposed to hold an election for new officers, including a new chairman to replace Head Bozo David Sadsack (Sajdak).

The election never took place because instead of starting the meeting off with, you know, the election, Sadsack attempted to run out the clock with non-relevant speeches and stuff.

By the time he got around to, you know, the election, time had run out and they had to vacate the school building where the meeting was being held.  At least, that’s Sadsack’s story and he’s sticking to it.

A lot of other nonsense took place – the usual fight over bylaws and Roberts Rules of Order – but I won’t bore you with that.  Suffice it to say a test procedural vote to gauge the level of support for Sadsack didn’t go his way…so he “recessed” the meeting.

Then on Thursday, Sadsack’s choice for chair, State Sen. Carrie Buck, tried to distance herself from her patron by issuing a statement calling on him to resign…which he did.

But the move backfired when if was discovered that Sadsack’s resignation announcement came out BEFORE Buck’s call for his resignation.  So it appeared the two tried to coordinate the statements to help Buck with damage control – and they even screwed THAT up.

Talk about a gang that can’t shoot straight!

And if you don’t think serious political damage has been done to Sen. Buck and her reputation, watch Ian Bayne’s 30-minute podcast recapping this circus $#!=-show.

I wrote on Friday that with Sadsack’s departure, Vice Clown Steve Sauerkraut (Silberkraus) would step in as Head Bozo to oversee the postponed election for a permanent new chairman.  But that might not be correct.

Indeed, some folks have written me maintaining that the terms of ALL the party officers automatically ended on July 20, 2021 when the elections were supposed to be held.

Which would mean Sadsack resigned from an office he no longer held anyway.

And Sauerkraut is no longer Vice Clown.

Nor does the party have a Secretary or Treasurer.

In other words, the Clark County Republican Central Committee right now is actually totally and completely rudderless with absolutely no officers whatsoever.

Henderson attorney Noah Malgeri has joined the growing field of Republican candidates seeking the nomination for Nevada’s 3rd Congressional District, which is currently being (mis)represented in DC by Susie Lee.