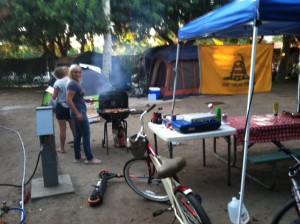 As the family and I are on vacation in San Diego at Campland on the Bay (that’s Gia to the right grillin’ up some burgers!), work is not exactly on my daily agenda – though I do have some meetings here scheduled for next week.

However, exposing the ever-pretentious Jon Ralston – Nevada’s #2 liberal blogger and unofficial spokesman for the Nevada Democrat Party – for the diva he is isn’t work.

Credit where credit is due: Ralston did get the scoop on Republican attorney general candidate Adam Laxalt’s performance review from his former law firm from two years ago.  It was a good “get” and gave his acolytes something to drop to their “we’re not worthy” knees for (he writes ending a sentence with a preposition).

But Ralston’s well-known and deeply-ingrained insecurities began popping up almost immediately after others began reporting on the story he broke.

As in, “Look at me, look at me!  I broke the story and everyone else is sucking hind teat!”

And so it began…

Ralston’s ruffled feathers again showed up Thursday morning after he slithered out of bed and read the daily newspaper.

“(Las Vegas Sun) story is interesting,” Ralston tapped out on his Twitter account (‘cause no real newspaper in Nevada publishes his screeds any longer).  “No byline.  And the Sun ‘obtained an image of Laxalt’s review.’  Explain,” he demanded of political editor Ryan Frank.

“Byline,” for those of you not in the newspaper biz, is the name of the person who wrote the story.  In this case the byline for this particular story was simply “Sun Staff.”

And this shows just how uber-sensitive the prickly hyper-liberal blogger (‘cause no real newspaper in Nevada publishes his screeds any longer) is.  The very next sentence in the story reads…

“The document was first reported by Jon Ralston.”

So the Sun gave Ralston full credit for breaking the story.  But Ralston was still peeved that it didn’t give him, in his own legendary mind, ENOUGH credit.

Apparently, reporting that he first reported about the document without reporting what was obvious to everyone else – that the Sun obtained the image of the document from Ralston’s blog (‘cause no real newspaper in Nevada publishes his screeds any longer) – constituted some kind of ethical lapse on the part of the newspaper.

Pettiness, thy name is Ralston.

“Sure. I wrote it,” Frank replied on Twitter.  “I typically use my byline when I do original reporting. In this case, I followed some guy with a political blog,” referring to the blog where Ralston broke the story.

“Ha,” Ralston replied.  “Got it.  Thanks for responding.”

“’Newspaper’ via [Laura Myers] taking on job of damage control for [Adam Laxalt].  Story of bad evaluations on 3B.”

You see, Ralston thinks it’s cute and clever to put the word “newspaper” in quotation marks when referring to the RJ – where he used to work before burning that bridge – to infer that it’s not a “real” newspaper because of its generally conservative editorial content.

It’s kinda like referring to Ralston as a “journalist.”  But back to the story…

Later in the afternoon, Myers scooped Ralston by publishing a statement from Laxalt’s former law firm which defended Laxalt and undermined the leaked document Ralston originally disclosed.  In response, Ralston tweeted (‘cause no real newspaper in Nevada publishes his screeds any longer)…

“Oh, ‘newspaper.’ [Laura Myers] has no docs that have favorable comments re [Adam Laxalt]. She regurgitated firm release w/o context.”

Which is super-hypocritical since Ralston’s own scoop consisted of a document of unfavorable comments about Laxalt which were spoon-fed to him by a Laxalt opponent which Ralston blogged about (‘cause no real newspaper in Nevada publishes his screeds any longer) without context.

This poor guy just can’t help himself.  Unless the mighty Jon Ralston breaks the news, it ain’t news…especially if it’s favorable to a conservative candidate.  What an egomaniac.

“Meanwhile, in Ely, they are charmingly out of touch with what’s going on.”

Yes, unless you’re writing about Ralston’s partisan stink bomb, you are “out of touch.”  You see, in Jon Ralston’s magnificently mashable mind it’s ALWAYS about Jon Ralston.

Later in the day Myers again scooped Ralston by publishing a story about Laxalt’s “rave performance reviews” from when he served in Iraq as a judge advocate general (JAG) lawyer.  Myers’ story included this snippet…

“Laxalt, who is running for attorney general, released the fitness report and counseling records to counter critical notes leaked from a private law firm, Lewis Roca, where he worked starting in 2011. He was given a harsh job review in fiscal year 2011-12, according to the notes from four attorneys at the firm. His legal skills were called sloppy and inadequate. And he was described as ‘a train wreck’ who needed further training to meet basic legal standards.

“The leak of the notes by Jon Ralston, a blogger and TV host of ‘Ralston Reports,’ damaged both Laxalt’s reputation and his campaign in the Nov. 4 election against Secretary of State Ross Miller, a Democrat and former Clark County prosecutor.”

And that sent Ralston over the edge and into e-rage!

“Of course,” replied the perpetually perturbed liberal blogger (‘cause no real newspaper in Nevada publishes his screeds any longer). “Also inaccurate, as is ‘raw notes.’  Her three stories have been printing Laxalt news releases.”

Um, duh.  News releases don’t become non-news just because they are favorable to a candidate St. Jon opposes and are broken by a real reporter.  Indeed, information in defense of Laxalt is every bit news as Ralston’s report on the raw notes (and, um, that’s exactly what they are) he published on Wednesday.

For all his “success,” Jon Ralston is such a small, petty fellow who doesn’t take criticism very well.  The fact is he hasn’t been a “journalist” for many, many years.  He’s a liberal political advocate.

And that’s exactly what he is.  And that’s all he is.  Ralston no longer has a “newspaper” column because nobody in Nevada will publish the Prickly Purveyor of Pap.  As such, our legend-in-his-own-mind not only regularly lashes out at conservative activists who expose his partisan bias, but real journalists such as Laura Myers who write for real newspapers. 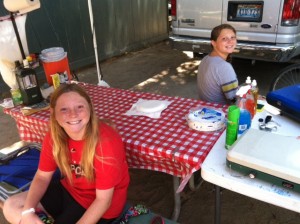 But not for me!

Back to Campland on the Bay, where I fully intend to beat my two lovely daughters – Jenna (left) & Kristen (right) – and make out like a bandit at this afternoon’s Candy Bar Bingo tournament!