Biden & Sisolak’s Stumbling & Bumbling No Longer Being Covered Up 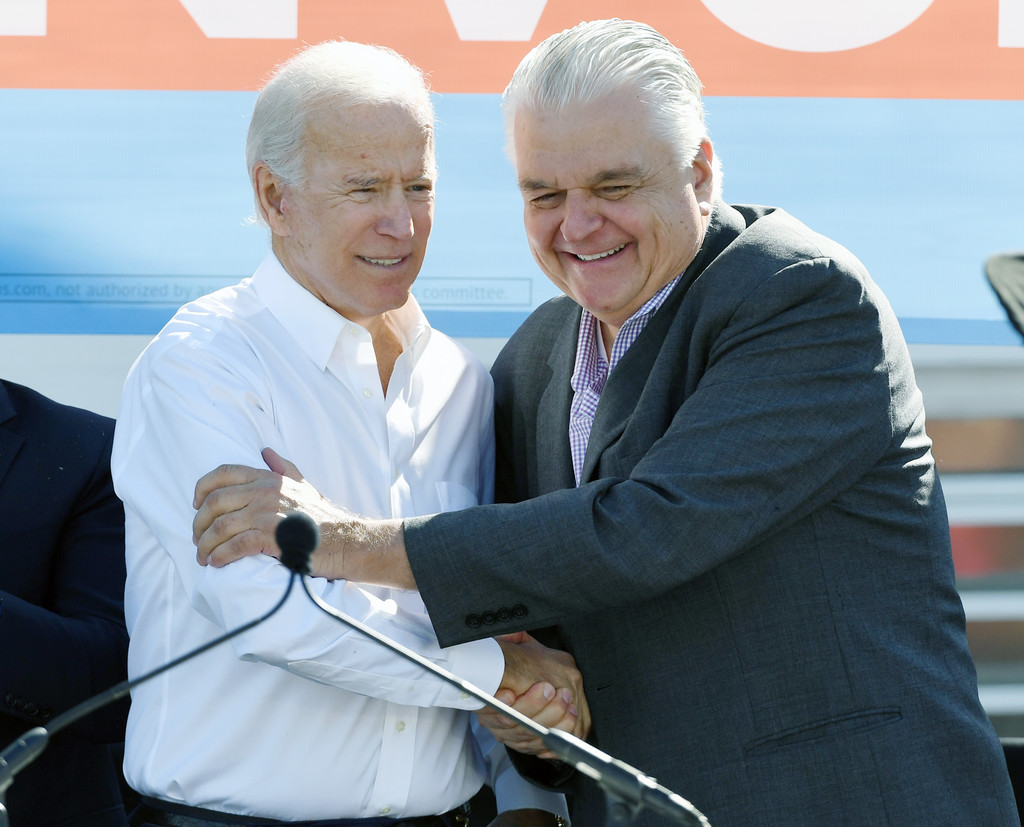 1.)  President Trump’s surge in the polls is so pronounced that even the fake news media is having a hard time suppressing it.  And it ain’t for lack of trying.  Don’t expect to see the following on CNN or MSNBC tonight…

“In the key swing states the gap is even bigger with 49 percent for Trump to 42 percent for Biden giving the incumbent US President an almost unassailable seven-point lead.

“It also appears clear that US voters have already made up their minds with a mere 3 percent of Trump voters and 9 percent of Biden supporters suggesting they could have a change of heart on polling day on November 3.”

“Portland’s mayor and Oregon’s governor have been deplorable in the ongoing crisis gripping the city. The chaos continues nightly. If they can’t control their streets and keep their citizens safe from agitators and anarchists, then call in the National Guard. This has to stop now.”

2.)  Gov. Sisolak’s incompetence in handling the CHINA-19 virus is so pronounced that Nevada’s media is finally starting to take the gloves off.

In a Sunday editorial, the Las Vegas Review-Journal slammed the governor’s administration for hiding “detailed information upon which (policymakers) are basing these life-and-death decisions,” suggesting “they’re actually flying blindly through the fog without instruments.”

The editorial notes that Gov. Sisolak has twice now ordered bars that don’t serve food to close, posing the obvious question: “Does food ward off the virus?”

The RJ further noted that the governor’s order prohibits the use of bar-top gaming machines in bars while allowing video poker consoles “right next to the existing bar tops.”

“The absurdity is readily apparent,” the paper concludes, adding that Gov. Sisolak’s administration “has stumbled and bumbled when it comes to communicating vital information to the citizens of the state.”

And then there’s the Ahern Hotel.

The off-Strip venue has hosted a number of gatherings over recent weeks that were well under the governor’s 50%-capacity rule and complied with social distancing and other precautions.  No problems.  Even Las Vegas Mayor Carolyn Goodman spoke at one of the events.

But once “Evangelicals for Trump” scheduled an event there, the empire struck back.

As RJ columnist Victor Joecks noted in his Sunday column, Sisolak “pushed Las Vegas officials to stop” the rally, claiming it violated his contradictory edict against gatherings of 50 or more; the same edict he’s using to keep churches, but not casinos, closed.

“Do you have any update on what’s happening with this event?” Scott Gilles, the governor’s senior adviser, asked city officials in an email.  “Governor keeps asking for updates.”

Joecks went on to note that another city official sent out an email saying the governor’s office was “calling Metro inquiring why they are not shutting down the event.”

“Through his office,” Joecks concluded, “Sisolak targeted this specific event and put pressure on local officials to shut it down.”

But it wasn’t political, was it?  Yeah, right.

For his part, John Katsilometes’ Sunday column highlighted the absurd and contradictory Sisolak regulations being enforced on entertainment establishments in Las Vegas.  Here’s what a city bureaucrat wrote to Bobby Kingston, the owner of the Saddles N Spurs Saloon…

“Live entertainment which includes karaoke at this point is prohibited with a few allowances. You can have a singer, piano player, guitar player or small piece band that is there playing music at an ambiance level. There can’t be any ticket sales, admission fee or headliner advertisement for the entertainment & no dancing.”

First, define “ambient.”  Like pornography, it’s in the eyes of the beholder.

Secondly, how does a solo singer or duet positioned 15 to 20 feet away from the audience pose a health risk when all the “experts” say we need to stay 6 feet away.

Thirdly, how do ticket sales or admission fees or Facebook ads spread COVID?  What’s the “science” behind that prohibition?  Let’s see the “data.”

It’s not the coronavirus that’s running rampant throughout Sisolak’s Nevada these days.  It’s the stupidity virus.

“As a physician, I believe state and local leaders have made arbitrary decisions and are going overboard in their enforcement of ever-changing rules. There has to be space for individual freedoms and personal responsibility. Shutting down peaceful events and even taking down the basketball hoops in local neighborhoods is not necessary.

“Whereas all citizens should take the virus seriously, we are long past a quarantine to flatten the curve, and there is no end in sight to government overreach. … (O)ur leadership insists on enforcing excessive, irrational protocols that promote unnecessary alarm. Government fearmongering has very real consequences that ripple throughout society.

“Not only will continued hysteria prolong the chilling effect on Nevada’s economy — notably our billion-dollar tourism industry — but the health and education of residents continues to take a hit.”

Dr. Greenberg concluded that “It’s time to alleviate the fear around COVID-19 and give Nevadans the freedom to choose to live their lives.”

Hard-hitting, critical opinion columns and articles such as these have been far and few between in the mainstream media during the first five months of Gov. Sisolak’s Reign of Economic Terror.  They’re a welcome development.

“It’s hard to miss the similarities of Fake News and coronavirus. They both hurt Black Americans and senior citizens more than others, they both spread by contact, both are deadly, and we have no cures.” – Scott Adams

“People are sick of the politicization of sports.” – Mark Dice

“Nevada Democrats have, for years, fine-tuned their political machine. But two months out from Election Day, they’re facing a Nevada that feels much more in play than many anticipated it to be…” – Reporter Megan Messerly

“I actually agreed with right-wing firebrand Chuck Muth earlier this month when he wrote that ‘the November election will NOT be an ALL mail-in vote like the primary,’ he wrote. ‘You’ll have the CHOICE to vote by mail, vote early in-person or vote in-person on Election Day.’  Those seem like three reasonable, viable options to me.” – Nevada Appeal columnist Guy Farmer