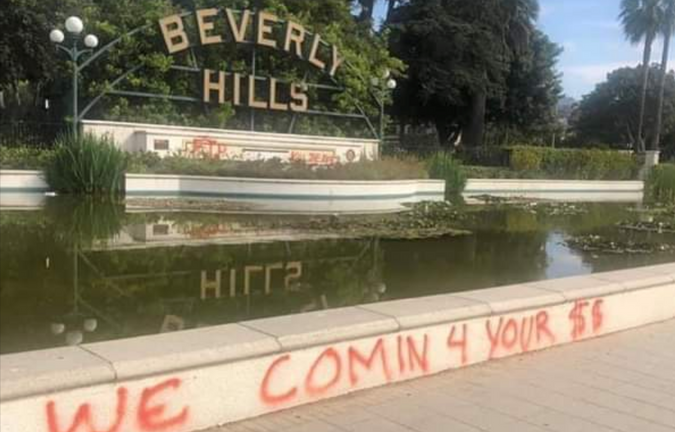 (Chuck Muth) – According to an Associated Press report, 23 “protestors” were arrested Friday night “after they ignored repeated orders to leave a neighborhood” in Beverly Hills, California.

Another “was arrested on suspicion of arson.”

Despite AP’s herculean effort to characterize the mob gathering as a “largely peaceful protest,” the fact is “the city issued an order restricting nighttime assemblies after a noisy protest disturbed residents.”

You see, your rights end where they infringe on the rights of others.  You could look it up.

Emboldened by the failure of police departments in other cities around the country to actually enforce dispersal orders, the Beverly Hills miscreants probably figured the Beverly Hills PD would turn a blind eye to their unlawful assembly as well.

Not only were the 23 arrested, they weren’t handed get get-out-of-jail-free cards so they could immediately return to the streets and continue the carnage.  Bail was set at $5,000.

The criminal violators who were unable to immediately post bail were, get this, kept in jail.

Which led, naturally, to defenders of mob rule complaining that detaining the agitators “places their health and safety in danger” due to the COVID19 virus.

Apparently these folks were never taught as children that actions have consequences and maybe they should have thought about that before choosing to break the law.

Austin Tharpe, a leader of the black separatist organization “which spearheaded the protest in Beverly Hills,” belly-ached that when he was arrested twice in separate earlier mob protests in Los Angeles and Compton they just “took our pictures, fingerprinted us, gave us citations and released us within an hour.”

The very fact that Tharpe had been arrested twice before for unlawful assembly and was still on the street wreaking havoc is a textbook example of what happens when breaking the law has no real consequences.

I suspect maybe we won’t be seeing many more mob protests in Beverly Hills.  Straight back to Compton.

* A Sex Offender, A Man Arrested 138 Times, A Husband Accused Of Threatening To Shoot His Wife — These Are A Handful Of Those Released Under NY’s Bail Reform.  Click here

* A homeless man who was arrested Wednesday was charged Thursday for allegedly breaking into a Winfield Street home apparently to make methamphetamine.  Due to bail reform laws city police were required to give Clark an appearance ticket and release him.  Click here

* Recent police reform has caused a state of “lawlessness” in New York City — resulting in the surge in gun violence, a top NYPD official said in a recent interview.  Chief of Crime Control Strategies Michael LiPetri blamed the troubling spike in shootings on parolees who are committing crimes with impunity.  Click here

* NYPD brass have expressed frustration with the state’s new bail reform law that the department believes is largely responsible for a surge in crime this year.  Police said in March that 482 people who were released without bail after being arrested in 2020 had reoffended and were then responsible for 846 new crimes, including 299 “major” felonies.  Click here

“The violence, the shootings are up. We haven’t seen this many since 1996.  There are a lot of different reasons for it – starting off with bail reform.” – NYPD Chief Terence Monahan