Banned from California by the Fruit Nazis! 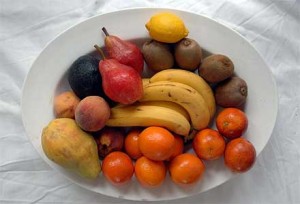 OK, so I left the Nevada GOP meeting in Reno on Sunday morning and headed south to Carson City with Gia and the kids. We had to pick up our girls’ BFF – who will be spending a couple weeks with us on her summer vacation – on the way home to Las Vegas.

Before leaving Carson City, I gave the kids a choice: We could go visit the ghost town in Bodie, CA or the Ichthyosaurus fossil park in Austin, NV. The ghost town beat the dinosaur bones unanimously. So we headed south on 395 and crossed the Nevada-California border right there at Topaz Lake.

And that’s where the trouble began.

As soon as you cross the border, you come to a “Checkpoint Charlie” roadblock known affectionately as an Agricultural Inspection Station. The stated purpose of these checkpoints is to make sure no rogue fruit flies and such are brought into California via out-of-state produce which could threaten the state’s agricultural industries.

OK, I get that. But let’s get real here. If I really wanted to smuggle illegal fruits and vegetables into California, I could have just driven around the lake’s eastern shore and bypassed the checkpoint. It would have added all of maybe 30 minutes to my trip. So seriously….these checkpoints are a complete, utter, stupid waste of time, manpower and money.

In other words, it’s a typical government operation. But I digress.

Now, I’ve been through these checkpoints dozens of time. There’s one on I-15 between Vegas and Victorville. And usually, if you’re a passenger vehicle, they just wave you through. Or if they do stop you and ask a question, they ask if you’re transporting any fruits or vegetables. After you say no, they wave you through and send you on your way.

But that’s not quite how things went down at Topaz Lake on this particular sunny Father’s Day morning.

I couldn’t hear the conversation, but the guy in the little Mercedes in front of me apparently consented to having his trunk opened and inspected right in front of my eyes, and the gal in the convertible in the lane to the right of me allowed the pillows in her back seat to be fluffed and searched.

This is not good.

After the Mercedes pulled out, I pulled up…and that’s when the spit hit the spam. These may not be the exact words, but they were certainly to this effect:

AGRI-CRAT COP: Where are you coming from?

ME: Why do I have to tell you where I’m coming from?

ME: Then shouldn’t you simply be asking me if I have any fruits or vegetables in my vehicle rather than where I’m coming from?

AGRI-CRAT COP: May I look inside your vehicle?

ME: Why? Do you have a reason to suspect that I’m carrying any fruits or vegetables in my vehicle?

AGRI-CRAT COP: No, but Agricultural Code Double-oh-Seven gives me the authority to search any vehicle.

ME: But the Fourth Amendment protects me from unreasonable searches without probably cause. Do you have reasonable suspicion to search my vehicle?

AGRI-CRAT COP: If you don’t consent to the search, I’m going to quarantine your vehicle. Wait right here while I get you a copy of Form Double-oh-Seven.

By this time I’m beyond agitated and my blood is starting to boil…as you’ll notice in this recording of the subsequent exchange after the woman returned with a man whom I assume was her supervisor. In short, the agri-crat cop notified me that she was “quarantining” my car and calling the California Highway Patrol.

So I pulled forward and off to the shoulder to wait for “The Man.”

The kids, of course, were none too happy…and I’m sure Gia was at least a little bit agitated. After all, all I had to do was open the stinking door, let them look inside and off we’d be to Bodie, right? Since we had nothing to hide, why make such a big stink over this, right?

And the kids wanted to see the ghost town!

This is what is called a “Teachable Moment”

So I turned to the back seats and started to explain to the kids that this was about our right to privacy, and that the government shouldn’t be allowed to stop and search you or your car or your house unless they have a real reason to think you’ve done something wrong.

At which point my 11-year-old daughter, Kristen, interrupted with just a tad of impatience. “Dad, I already know that. It’s in the Bill of Rights. I just read about them last week. Here, it’s in my schoolwork.”

Naturally, she’s home-schooled by her mom, not government-schooled!

Anyway, Kristen then dug out and handed me her worksheets from last week…and sure enough, the first ten amendments, including the 4th amendment right to privacy, was right there in black-and-white. I was half-tempted to take it back to the agri-crat cop and show it to her, but that would have been a complete waste of time.

To the agri-crat cop, the only thing that matters is Form 007.

Well, it took about 40 minutes for the highway patrolman to arrive. When he did, I explained what happened and my position: If the agri-crat cop can articulate reasonable suspicion, I’ll consent to the search. But if not, I didn’t see why I should. The patrol officer then walked over to the guard shack to discuss the matter with the agri-crat cop.

About 5 minutes later, the patrol officer returned to my vehicle with the agri-crat cop. He informed me that he had reviewed the Agricultural Code and Form 007 and that I basically had two choices: Either consent to let her look in my vehicle or turn around and go back to Nevada. Unless I consented to the search, I was banned from entering California!

You see, this is how they get most people….especially when it comes to the TSA and its ungodly airport checkpoints/peep shows. It’s such a “minor” thing to put up with in order to be allowed to go about your business, right? Especially, as the patrol officer advised me, if you “have nothing to hide.”

And the kids really, really, REALLY wanted to see the ghost town.

Alas, this won’t be the only time my kids will experience disappointment in their lives. I just couldn’t bring myself to giving up such a fundamental God-given right as a condition to entering a state in the United States of America….even California.

Sure, if I had nothing to hide, what was the big deal in letting the agri-crat cop look in my vehicle, right? But on the other hand, if she had nothing to suspect, why insist on the search?

Because she could, that’s why. And because I challenged her authority by asking why she asked where I was coming from. This was a bureaucratic power trip and….well, she won. She had all the cards….PLUS Form 007 on her side!

So I loaded the kids back into the van, made sure the 4-year-old was strapped into his government-approved booster seat and the other kids in their government-mandated seat belts, made a U-turn and proceeded to drive back home to Las Vegas through Nevada instead of California.

Bodie will just have to wait for another time.

Some Call it Entrapment

Oh, I almost forgot. The highway patrolman did explain why they ask where you’re coming from rather than simply ask if you’re carrying any fruits or vegetables. If you answer that you’re coming from what they believe is a high-risk agricultural area which might be home to an unwanted fruit fly or something, THAT gives them “probable cause” to request a search.

In other words, it’s a trap. A set-up. They trick you into giving them “probable cause” by asking what otherwise would seem like an innocuous question about where you’re coming from.

Unfortunately for me, questioning the constitutionality of that question resulted in a border skirmish in which the Fourth Amendment lost to Form 007.

But I think it was worth it; if for no other reason than to demonstrate to my children how important it is to stand up for your rights when the government is wrong. Or as Ronald Reagan so famously put it:

“Freedom is never more than one generation away from extinction. We didn’t pass it to our children in the bloodstream. It must be fought for, protected, and handed on for them to do the same, or one day we will spend our sunset years telling our children and our children’s children what it was once like in the United States where men were free.”

And by the way, I’m far from the only person to raise a stink about this BS. After I told Assemblyman Ed Goedhart what had happened, he directed me to a terrific video of another American citizen who also refused to succumb to an unreasonable search by the agric-crat cops in another part of California. It’s great!

And finally, I did tweet this experience live. So if you’re not yet “following” me on Twitter…why not? You’re missing all the fun! Click here