Attack of the Paultards: The Sequel 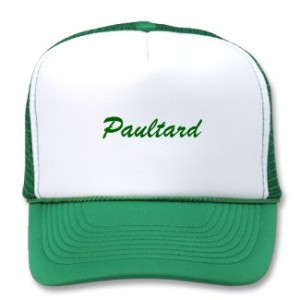 For the latest example of how certain Ron Paul supporters self-destructively act as voter repellants rather than voter magnets, I give you Carl Dunce.

Dunce – Paul’s state director for Nevada – has his panties in twist over the Clark County GOP holding a special after-sundown caucus next week for Orthodox Jewish and 7th Day Adventist Republicans at a private school named after Sheldon Adelson – perhaps THE most generous donor to conservative/libertarian/Republican causes and candidates in all of Nevada in the history of Nevada.

But Adelson is also a major donor to a super PAC (which I’m an adviser to) supporting the presidential campaign of Newt Gingrich. And even though the private school was selected as a caucus site BEFORE Mr. Adelson got involved with the super PAC, Dunce is throwing a hissy fit; claiming Gingrich is trying “to have his billionaire buddy try and buy an election for him.”

Could you be any more crass and insulting, Mr. Dunce? And how is offering a free location in a public building for the simple purpose of holding a meeting “buying an election”? I know paranoia runs deep among some of you folks – anyone remember Jeff “Chemtrail” Greenspan in ’08? But not everything in politics is potential subject material for a sequel to “Conspiracy Theory.”

As Clark County Republican Party Chairman Dave Gibbs explained in the Las Vegas Sun this morning, the Adelson Educational Campus was chosen because “A, it was free; B, it was available; and C, it was big enough. That’s it.”

A man who has given SO generously for SO long to SO many conservative and GOP causes and candidates here in Nevada doesn’t deserve such sneering scorn and contempt by the leader of the Paul campaign in Nevada. Mr. Dunce ought to extend Mr. Adelson a public apology…as well as a note of appreciation.