Apparently, All Pledges are Not Created Equal 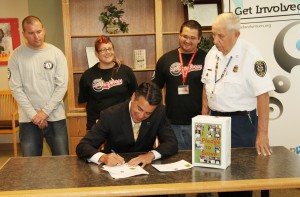 Yesterday, Gov. Brian Sandoval’s press shop issued a release announcing that the governor had signed Nevada Volunteers’ “Pledge to Serve;” a promise to volunteer 40 hours with an organization of his choice over the next year.

Sheesh! You mean they wouldn’t just take the governor’s word for it?

And, um, that’s that point.

You see, when we asked the governor to sign the Taxpayer Protection Pledge – promising to oppose and veto any and all efforts to increase taxes – back in September 2009, just after he announced his candidacy, the governor refused.

“I’ve just never been a believer in signing pledges,” the governor told the Las Vegas Review-Journal back then. Instead, Sandoval said he was willing to sit down with anyone “seeking for me to sign a pledge of any kind” and we would know where he was coming from and be fine with just his verbal assurance.

In response, I wrote on Muth’s Truths:

Hmm. I wonder if he signed a pledge to repay the mortgage on his house. Or the loan for his car? Or did his banks grant him those loans on his word and a handshake? And what about using his credit card when shopping at Wal-Mart. When the clerk hands him the sales slip to sign pledging to pay for the purchase, does Sandoval say “I don’t believe in signing pledges and if you would just sit down with me you’d understand where I’m coming from”?

I also added this warning:

The problem facing Brian Sandoval and others who “say” they’re not going to raise taxes but don’t think they should put that promise in writing is that so many politicians in the past have broken such verbal promises or found “loopholes” in their campaign commitments once elected.

And lo and behold, what happened at the end of this year’s legislative session?

Well, the governor broke his verbal promises – which he unambiguously made over and over and over again – and engineered a $600 million tax hike in the form of an extension of tax hikes from 2009 which were supposed to expire this past June.

So pardon me if I find it supremely hypocritical for Gov. Sandoval to sign a pledge promising to volunteer 40 hours over the next year while refusing to sign a pledge not to raise our taxes despite his verbal assurances to that effect.

Indeed, a signed pledge is, absolutely, positively far stronger and more binding than a verbal commitment…especially when it comes to politicians. In fact, not one member of the Legislature who DID sign the Taxpayer Protection Pledge voted for the governor’s $600 million tax hike.

So now that we know that Gov. Sandoval DOES sign pledges after all, we call on him once again to sign the Taxpayer Protection Pledge before the start of the next legislative session…especially in light of how lightly he took his verbal promises this year. Guv?