Another Republican Kicks Taxpayers in the “Junk”

Here we go again. Yet another example of why taxpayers just can’t trust any Republican candidate who refuses to sign the Taxpayer Protection Pledge.

According to a weekend story by Ray Hagar of the Reno Gazette-Journal, Republican state Sen. Greg Brower now supports Nevada Gov. Brian Sandoval’s proposal to re-impose some $620 million worth of the “temporary” tax hikes that were supposed to expire next year – a huge tax hike which, by the way, Brower voted AGAINST last year!

Here’s why this is so outrageous…and not just because Brower was against the “sunsets” before he was for them.

First, the tax hikes are being re-imposed, NOT to avoid cuts in education, but to end the furloughs of state workers and give them raises. Plus, if there actually are cuts to education being considered, then cut something else of lower priority in the budget instead of education. So this excuse is just that…bull. 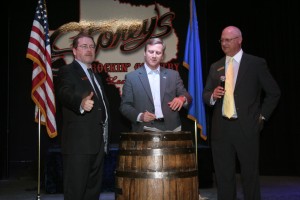 But secondly, last year when Brower was running in a Republican primary to fill the vacancy in the 2nd congressional district created when then-Rep. Dean Heller was appointed to the U.S. Senate, Brower, a perceived moderate, signed the FEDERAL Taxpayer Protection Pledge in an effort to show he was as conservative as his GOP opponents at the time – Mark Amodei, Sharron Angle and Kirk Lippold.

But once he lost that race after the courts determined that the Nevada GOP had to choose its nominee, not the voters, Brower decided to run for re-election to the state senate this year…but opted NOT to sign the STATE Taxpayer Protection Pledge.

In other words, Brower is opposed to raising your federal income tax and willing to sign his name to that effect, but has no qualms with raising the taxes you pay here in Nevada – including $620 million worth of tax hikes he voted against just last year.

Lesson: ANY Republican not willing to put his signature to his rhetoric about opposing tax hikes isn’t committed to opposing and voting against any and all efforts to raise taxes.

Sen. Brower is just the latest in a long line of Republican candidates who say one thing on the tax hike issue when it’s easy or convenient or imperative in a GOP primary, but do the exact opposite when tough decisions have to be made.

Any candidate who refuses to sign the Pledge tells taxpayers all they really need to know about where they stand on this issue. As we just learned (the hard way) once again.