Why Teachers Don’t Get No Respect

I’m not sure, but I think the teachers union goofballs act more like children than the children their members teach. Get a load of this call-to-action from Clark County Education Association union boss/head goofball Ruben Murillo which was just sent out:

CCEA, along with many schools, has embarked on a letter writing campaign aimed at Governor Sandoval. Our goal is to express our extreme dissatisfaction with his education budget and the impact it has on the students and staff in the Clark County School District.

During the CCEA/SEIU rally last week, participants wrote letters to the governor. Those letters were placed in a coffin. The coffin represents the mortal attacks on public education and its demise if funding is cut and our collective bargaining rights are eroded.

We need your help. We ask that you participate and organize a letter writing campaign at your school. The message: To demand Governor Sandoval finds additional funding for education because students and educators of Clark County deserve a well funded education system and deserve a Governor who will work hard to make it so.

Here’s what you can do:

• Hold a 10-minute CCEA meeting before or after school explaining the letter writing campaign.
• Encourage teachers to have their families, friends, and children write letters to Governor Sandoval.
• Once the letters are written, collect and bring them to CCEA by Friday, May 20, 2011. Also, we will be holding an Association Rep Council meeting on May 24, so you may ask your AR to bring letters to the meeting.

Here’s what CCEA will do:

• Put all letters in the coffin and deliver it to Governor Sandoval the week before Memorial Day weekend.
• Contact the media when we deliver the coffin so that we can deliver a very public and loud message to the Governor.

We have approximately 500 letters in the coffin now and want to fill it to the brim. With your help, we will find it difficult to close the coffin, so… start your letter writing campaign now! 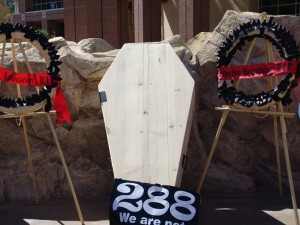 I mean, can you get more ridiculously juvenile than this? Professional wrestlers conduct themselves with more dignity than this. And yet some wonder why so many people no longer see teachers as highly-respected professionals? When you act like a goof, you get treated like a goof.

Would somebody PLEASE tell me why teachers allow their union to keep making them look like complete horse’s asses?