The Buck Stops Here: Anatomy of a Smear – Part I

In the movie The Dark Knight, there’s a scene where Alfred Pennyworth is talking about the nature of The Joker with Bruce Wayne/Batman.   Wayne says, “Criminals aren’t complicated, Alfred.   You just have to figure out what he’s after.”

To which Alfred responds that “some men aren’t looking for anything logical, like money. They can’t be bought, bullied, reasoned, or negotiated with. Some men just want to watch the world burn.”

That scene came to my mind last night as I listened to a woman named Tiecha Ashcroft kvetching about recess at a meeting of the Pinecrest Academy Charter School board in Henderson.

Of all those who spoke before Ms. Ashcroft took the floor – teachers at the school and parents of children who attend the school – every single one voiced support for the school’s new principal, Dr. Carrie Buck.

And by the time Ms. Ashcroft got halfway through her lone diatribe of discouraging words, it became abundantly clear…

She’s one of those people who just wants to complain. You can’t reason with her.  You can’t negotiate with her.  Some people just want to b- – – -.

But I’m getting ahead of myself…

Why would I be sitting in a board meeting for over 90 minutes listening to parents and teachers (and one outstandingly articulate young lady who is a 5th-grader there) talking about a petty school brouhaha over recess when I homeschool my own kids and have no involvement with the school in question whatsoever?

Because like the Caped Crusader I can’t just stand idly by and watch good people doing great things for kids suffer the injustice of being unfairly and unethically attacked. Especially when it comes from a conservative who’s supposed to be a professional and certainly should know better.

But before we get to the molehill incident itself, let me first put this in some proper perspective by telling you a little about the person who was attacked. 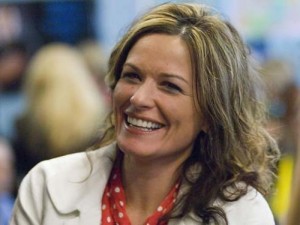 Principal Carrie Buck is everything you and I would want in a public school administrator. She insists on school discipline, sets high but achievable goals for both students and teachers, has an open-door policy for parents, and doesn’t whine about not having enough money from taxpayers to get the job done.

She got her start 23 years ago in an elementary school classroom. She is an ELL (English Language Learner) specialist, as well as a Teacher Mentor and Instructional Coach.

In 2006, Buck was appointed principal at C.T. Sewall Elementary School in Henderson. Sewall, at the time, was described as being “in transition.”

That’s PC-speak for “in the crapper.”

The building itself is the oldest in southern Nevada still in use. The student body is primarily low-income and minority – many for whom English is their second language.  The staff entrance figuratively consisted of a revolving door.  Morale stunk, as did the students’ test scores.

What Buck’s leadership was able to achieve over the next seven years was nothing short of miraculous.

Test scores soared. Math proficiency shot up from 36% to 89%, while English proficiency increased from 35% to 83%.

Sewall went from one of the worst schools in the state to one of the absolute best.

Indeed, the school’s reputation for academic excellence became so well know in the community that a number of parents unlawfully established false residences with friends and family in the neighborhood just so their kids could be zoned to attend Sewell.

As such, the student body swelled, straining the school’s limited resources

But rather than kvetch about “under-funding” education, Buck went out into the community and, in her time at Sewell, raised “over four million dollars in grants, private funds and donations that provided basic needs for students and their families, as well as instructional supplies, facility improvements, academic enrichment, and technology for the school.”

While not quite qualifying for sainthood (yet), Buck has received considerable recognition for her talents and achievements…

* In 1999, she received the “Most Outstanding Educator” commendation from the City of Henderson.

* That same year, she was one of seven chosen for the national ASCD Outstanding Youth Educators Cadre.

* In 2011, she received the Shining Star Award from the Mind Research Institute for tremendous student growth in math.

* In 2013, Buck was inducted into the Clark County School District’s “Excellence in Education Hall of Fame.”

* And earlier this year Dr. Buck was nominated for the Life Changer Award from the National Life Group.

A bona fide expert in her field, Buck is a highly-sought after public speaker on education reform and excellence. She and her success at Sewell were featured in a March 2013 article for the National After-School All-Stars Program.  And in 2013, Sewell was chosen as a Model Highlight School.

In January of this year, C.T. Sewell was designated as a State of Nevada Model School, as well as a National Title I Distinguished School.

One month later The Miracle Worker left Sewell and accepted the Principal position at Pinecrest Academy after the school’s founding principal abruptly and unexpectedly left the position under a cloud of circumstances not relevant to this discussion.

Suffice it to say, Buck took over Pinecrest under less than ideal circumstances eight months ago.

More on that in Part II of “The Buck Stops Here: Anatomy of a Smear.” Stay tuned Batfans…