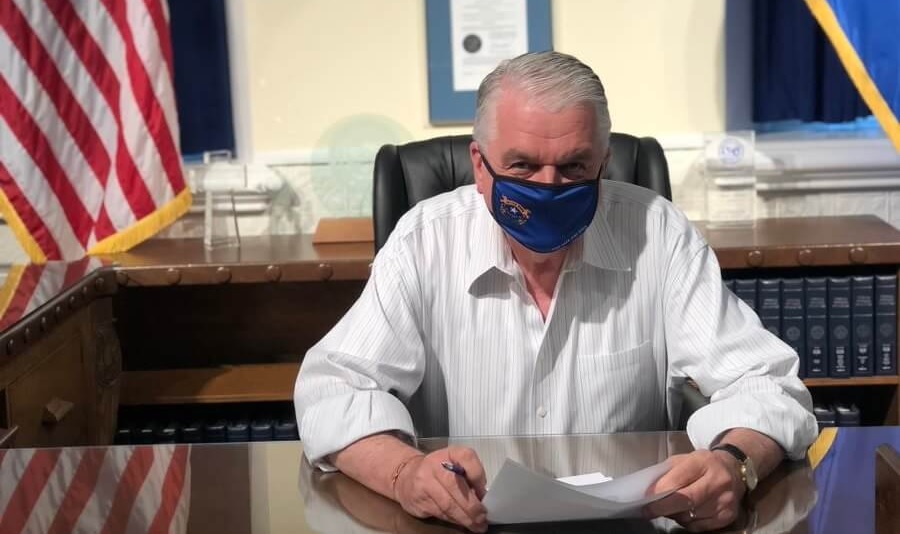 (Chuck Muth) – I don’t think anyone in Nevada has been as hard on Gov. Steve Sisolak for his mishandling of the coronavirus scamdemic than yours truly.  But it’s truly not personal.

In fact, I’ve known Steve for over 20 years.  Always thought, mistakenly, that he was that rare moderate Democrat who wasn’t reflexively anti-business or captured by the far-left crazies – you know, like Jon Ralston and the millennial kids over at Battle Born Progress.

But something happened to this guy during his Democrat primary campaign for governor in 2018 against consistently-liberal Chris Giunchigliani.  He didn’t just move from center field to left field.  He moved all the way over into the left field bleachers!

Nevertheless, I cut him some slack even as he filled his administration with incompetents, left-wing Bolsheviks and affirmative action picks – especially his head of the state’s unemployment office.

And I pretty much held my tongue during the last legislative session hoping he would be a bulwark against the worst far-left inclinations of his party in the state Senate and Assembly.

Indeed, he succeeded in watering down a bill giving collective bargaining rights to state government workers by insisting on adding gubernatorial veto power over such agreements. That was a good thing.

But the honeymoon came crashing to an end on March 17, 2020 when he unilaterally exercised unlimited “emergency” powers to single-handedly bring the state’s entire economy to its knees with his #SisolakShutdown.

As Michael Corleone said in The Godfather, it’s not personal; it’s business.

Gov. Sisolak has routinely violated core components necessary for effective leadership.  Particularly, if your orders aren’t consistent and clear – or are clearly hypocritical – people won’t trust you.  Which means they won’t listen to you.

And Sisolak blew it right out of the gate.

While his order shutting down our gaming industry was clear, he then fudged it up by declaring that other “non-essential” businesses “should” close.

Naturally, businesses that didn’t consider themselves “non-essential” decided to stay open if given the option rather than put their workers out on the street.  That pissed the governor off.  So he had to change his edict from “should” close to “must” close.

And it’s been all downhill ever since.

In addition, if – as the governor declared at the beginning – EVERY social contact risked spreading the virus, then why did he exempt so many from his shutdown and house arrest orders?

Oh, and the homeless – clearly a high-risk population – have routinely been exempted from every “emergency” order.  What’s up with that?

But the ultimate in hypocrisy and inconsistency has been his prohibition on gatherings of 10 or more (since updated to 50) – including family get-togethers for Easter, Mother’s Day, weddings, funerals and graduations – but not for the thousands of agitators who participated in Black Lies Matter protests, lootings and riots (including the shooting of a Metro law enforcement officer).

When you’re that inconsistent and hypocritical, you lose all moral authority to lead.

If the governor was truly making his decisions 100% on health considerations to “slow the spread,” he would have shut EVERYTHING down and confined EVERYONE to house arrest with the limited exceptions of truly essential services such as police officers, firefighters, hospital professionals and the courts.

Yes, food is also essential.  However, he could have and should have ordered curbside pickup or home delivery for grocery stores just like everyone else.

Either this was a serious pandemic demanding shutdowns and house confinement or it wasn’t.  Instead, the governor tried to have it both ways; picking winners and losers for political purposes, not health considerations.

And don’t even get me started on how horribly the governor and his staff have mishandled the hundreds of thousands of unemployment claims that flooded the Department of Employment, Training and Rehabilitation (DETR) immediately after the #SisolakShutdown was ordered.

Here we are FOUR MONTHS later and there are STILL tens of thousands of Nevadans who haven’t been able to get their checks.  That’s not just mere incompetence.  That borders on criminal malfeasance.

The governor’s response to people who can’t pay the rent and put food on the table?  “Be patient.  We’re working on it.”

Which brings us to his new Face Diaper Decree.

After refusing to order everyone to wear a mask weeks ago – for what he, himself, said was for political reasons – he then reversed himself.  Par for the course.

But while ordering everyone to wear a face mask, he declared he wouldn’t enforce it against individuals.  Again, for political not health reasons.

Instead, he’s now penalizing private businesses that don’t enforce the order that he himself refuses to enforce.  That’s dead wrong.

7-Eleven clerks, cashiers at retail stores, barbers and manicurists are not law enforcement officers.  Why should they be charged with doing the governor’s dirty work?

If customers are in a business in violation of Sisolak’s mask order, those individuals should be cited by government “Karen Patrol” officers, not the business owner and/or their employees.  Let’s see how THAT works out.

If Steve Sisolak isn’t America’s worst governor – the competition from New York, New Jersey, Michigan, California and Washington is fierce – he’s certainly proving himself to be the most inept.

He’s so far in over his head it ain’t even funny.

And the big government Bolshevik’s he’s surrounded himself with – especially his Chief-of-Stuff, Michelle White – have been steering him even further down this highway to hell.  We’re doomed.

Coming up in Part 2…

Every press conference the governor has held since Day 1 has been a disaster – both technically and substantively.

In the next edition of “Sisolak’s Shutdown: The Ultimate Insult,” I’m going to take just one of them and break it down piece by piece, part by part, to demonstrate just how horribly this guy has mangled the entire situation.

“I am used to amateurs seeing what they expect to see in a story and nothing else. I am used to amateurs not knowing who writes headlines. What I don’t understand is why you so frequently choose to come across as an amateur.” – Las Vegas Review-Journal columnist Debra Saunders to liberal blogger Jon Ralston in a tweet