The propaganda campaign against a common sense proposal by the Las Vegas City Council to ban camping and pooping on certain downtown city streets and private property by homeless individuals – when beds are available at local shelters! – continued this week at city hall.

At a hearing on the proposal at Wednesday’s city council meeting, protesters falsely claimed the ordinance – similar to laws already in place in over 170 other cities around the country – “criminalizes homelessness.”

When your position on an issue requires you to outright lie to the public, you know you don’t have a leg to stand on.

And one opponent who spoke at the meeting uniquely demonstrates just how dishonest this disinformation campaign – aided and abetted by numerous Democrat presidential candidates – has really been.  Watch this video first…

In case you can’t access the video for some reason (Russian interference!), here’s what the smartly-dressed and well-coiffed lady said…

“Good afternoon.  My name is Gabrielle d’Ayr (pronounced “dare”) for the record, and I reside in Clark County.  I’m a United States Navy veteran and I’m homeless.”

“Navy veteran.”  Nice touch.  But here are some things Ms. d’Ayr appears to have conveniently left out of her introductory bio…

Let’s start with the fact that this “homeless” individual was handing out business cards at the hearing showing that she’s the “1st Vice Chair” of the Clark County Democratic Party. 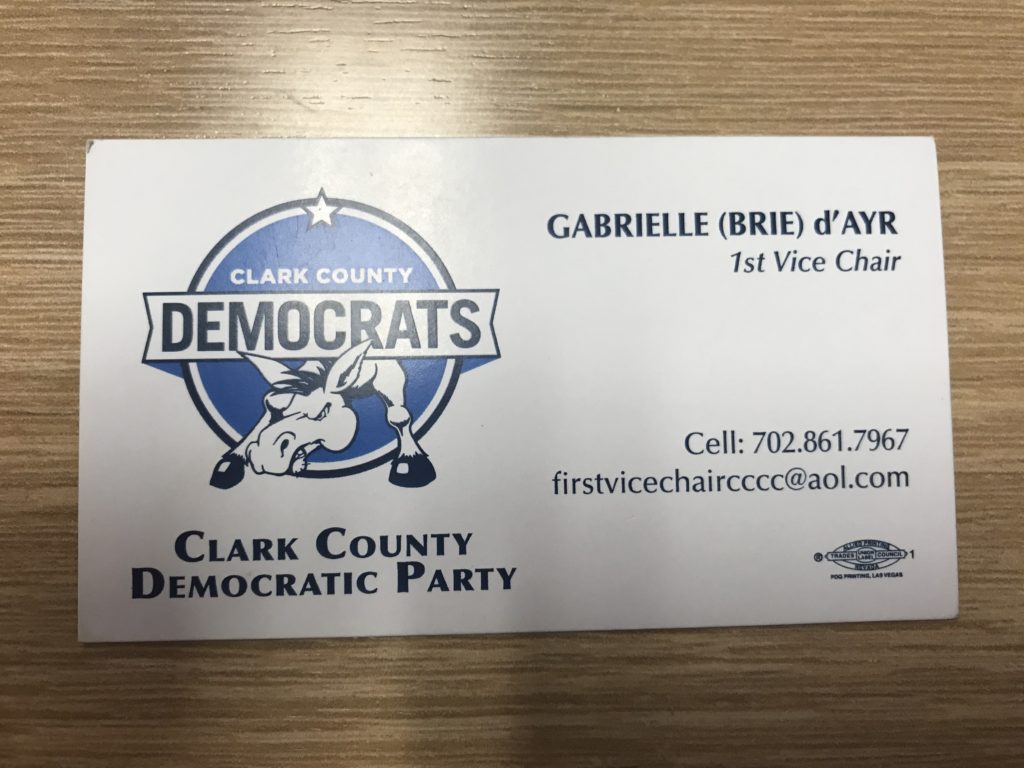 Gotta wonder why a “homeless” individual spends time on volunteer partisan political activities instead of, you know, finding a paying job and a home.  Seems like a problem of misplaced priorities to me.

A little more digging uncovered this undated photo from earlier this year which shows Ms. d’Ayr, dressed to the nines (love that bag!) and posing in front of the Washington, DC congressional office of Democrat Rep. Susie Lee who was sworn into office in January… 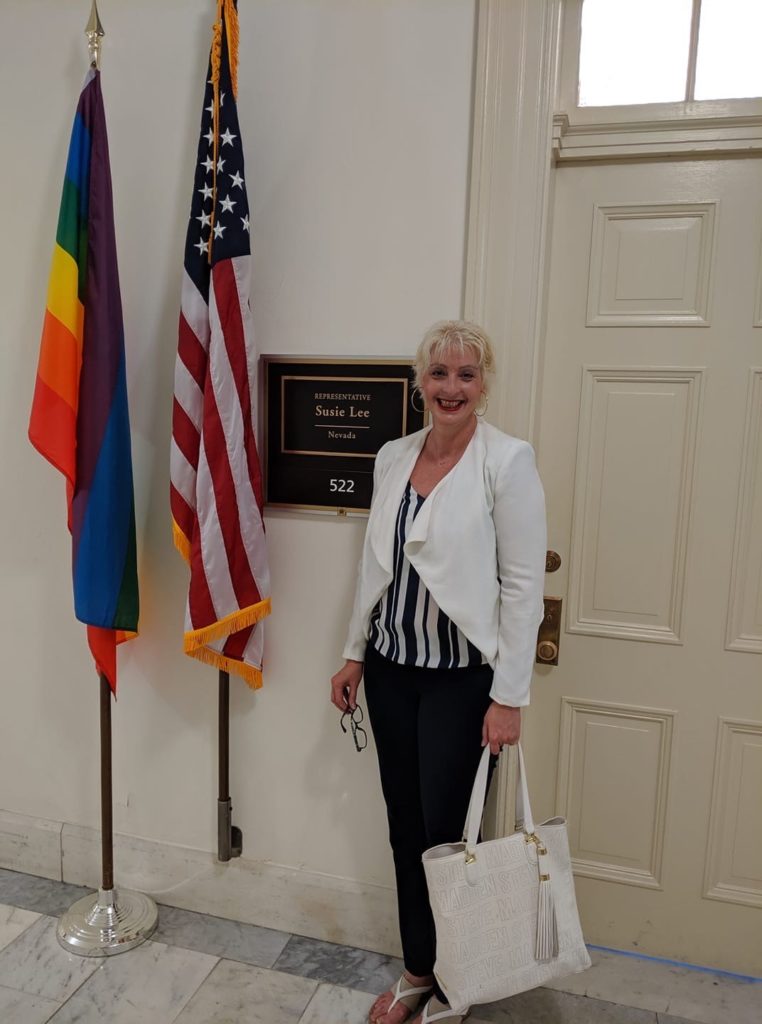 Gotta wonder how a self-proclaimed Clark County “homeless” person found the money to travel all the way to our nation’s capital for a grip-and-grin with a liberal congress-critter when she supposedly can’t find money to pay rent.

Next, I found out that Ms. D’Ayr was a registered lobbyist this year at the Nevada Legislature…

And, um, how was she able to afford to get her hair professionally cut-and-dyed if she can’t pay the rent?

This is also the address where she’s currently to registered to vote – as a Democrat, of course.

I was able to find a photo of her listed home on Zillow.com this morning…

Which means that Ms. d’Ayr was claiming to live in a $491,000, 1,508 square foot, 2-bedroom/1-bath, single family home on an acre of land with a 506 square foot garage, central A/C and a fireplace(!) during the legislative session just a few short months ago.

But if you’re starting to think Ms. d’Ayr’s “homeless” story stinks on ice, hold on.  I’m just getting warmed up.  Get this…

Last year she ran as a Democrat for the Nevada State Assembly! 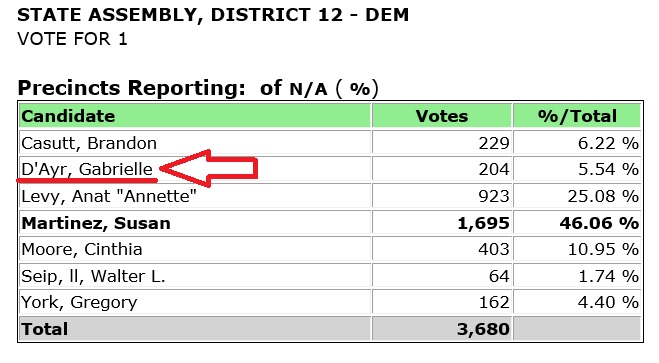 Didn’t do too well. Came in fifth.

But there are even more interesting things than the fact that a woman claiming she can’t find the time to find a job to pay the rent somehow found the time to run for the Legislature.

Let’s start with the fact that her Campaign Finance Disclosure report showing on the Secretary of State’s website lists her Miller Lane address…which is on the exact opposite side of town from Assembly District 12 where she was running.

But on her Contributions & Expense Reports (see below) she lists a different address: 6277 Barnsdale Court.

I was also able to find some photos of her $275,848 Barnside Court home on Zillow.com this morning… 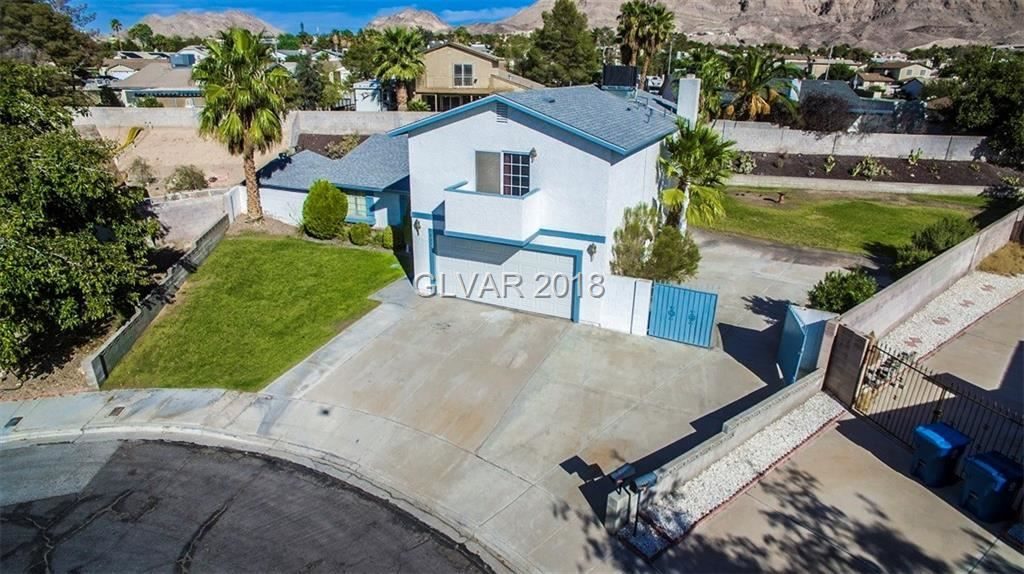 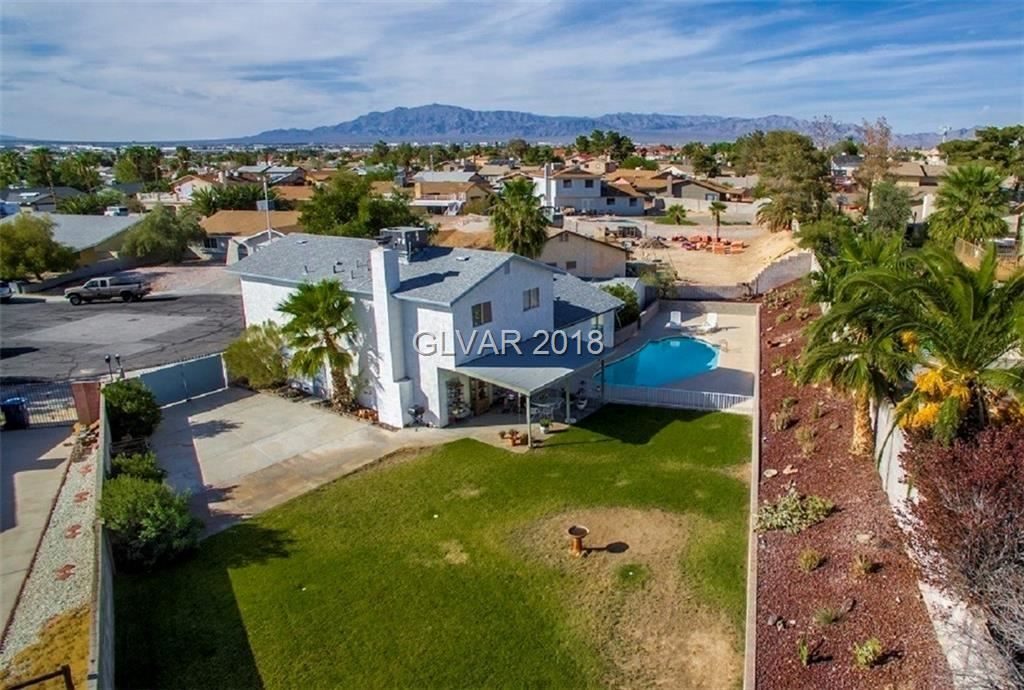 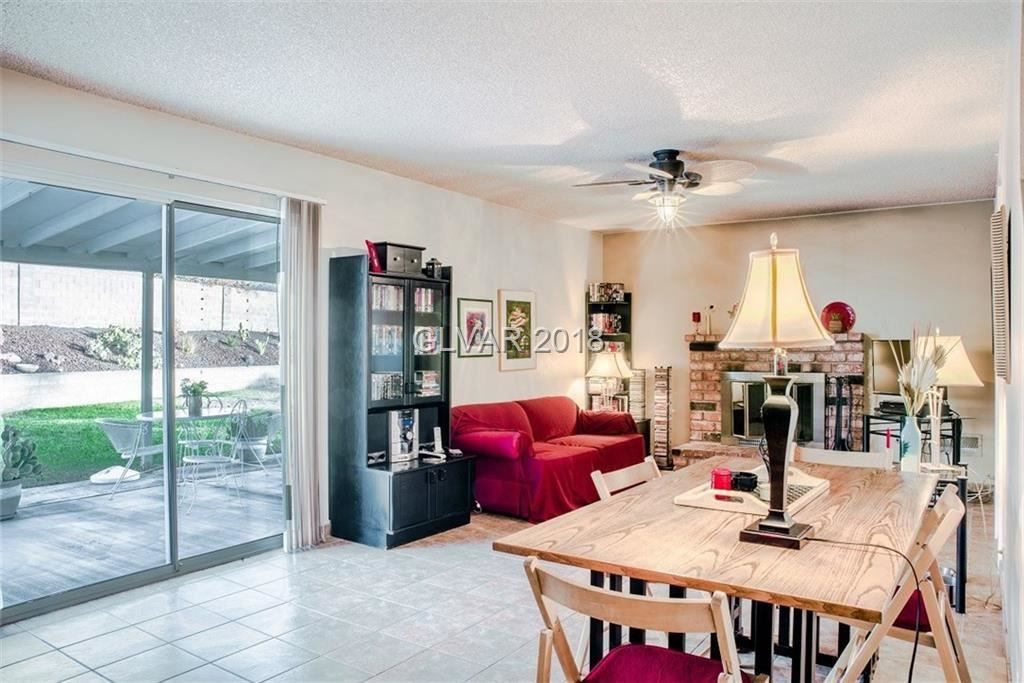 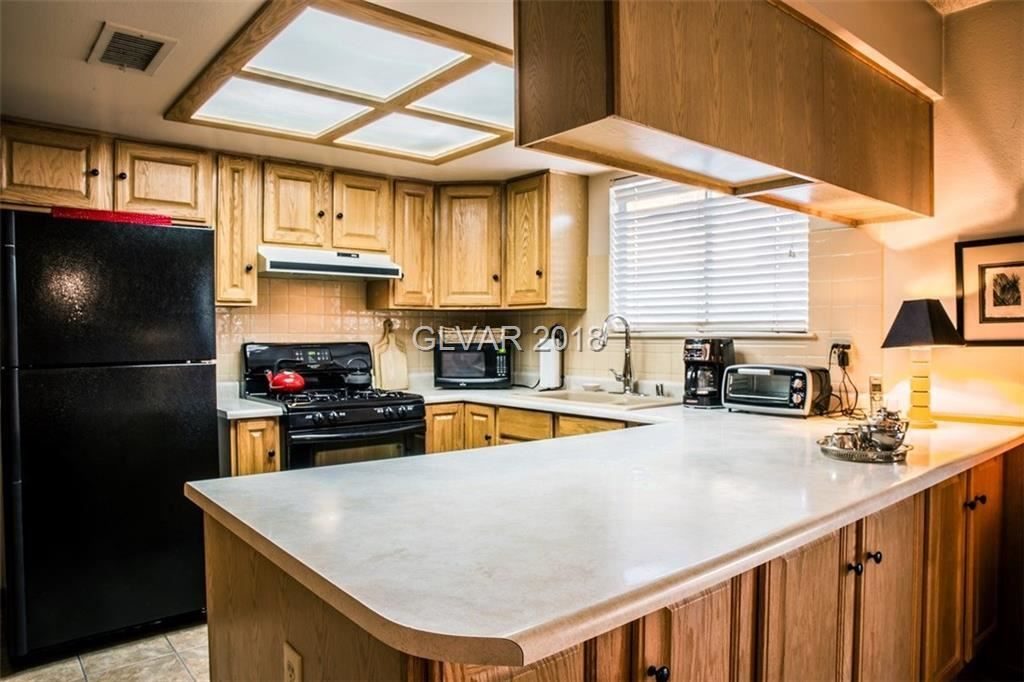 Interestingly, Ms. d’Ayr’s FDS also shows she had no major debt and a job at Brooks Behavioral Health Center.  Which is curious because… 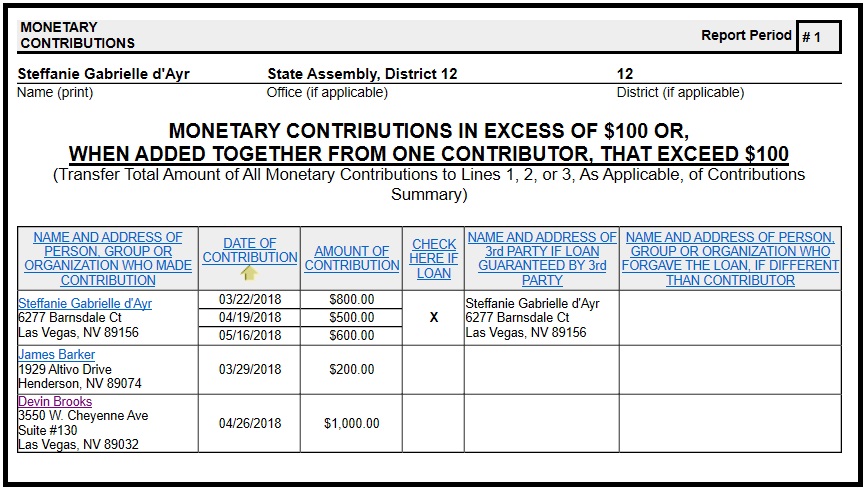 First, how many “homeless” people have $1,900 in cash lying around to spend on a political campaign?  I’m just saying.

Secondly, that $1,000 campaign donation came from the same guy who appears to own the business where Ms. d’Ayr supposedly worked.

What exactly did she do for them?  And why is she apparently no longer working there after losing her election?

Ah, what a tangled web we weave…

Another interesting tidbit is that Ms. d’Ayr reported spending $1,000 of her campaign funds to the Nevada State Democratic Party for “consulting.”

No, this “homeless” person isn’t just a partisan political activist/agitator, is she?

Look, maybe there’s a reasonable explanation for all of this.  But something about this lady’s story stinks like yesterday’s diapers.

Sorry, but I ain’t buying her claim to being “homeless” at face value.  There’s clearly a LOT more to her circumstances than she told the city council.

Frankly, I think she’s full of the stuff many of the homeless are leaving in city streets and on the doorsteps of downtown shopkeepers.

I wonder if anyone in the “real” media will look into this and expose her for the fraud she appears to be.

And I wonder if one day pigs might fly.