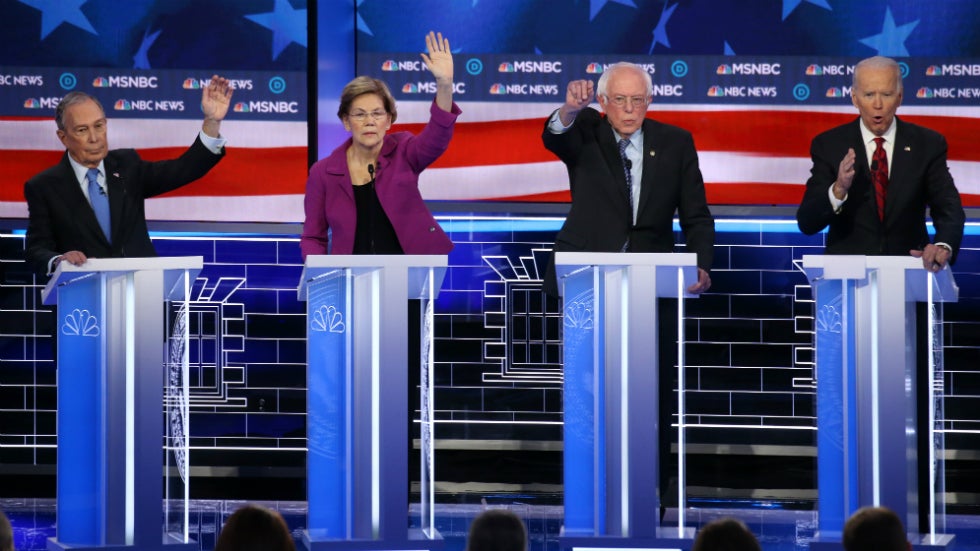 I just had a feeling.  A feeling that last night’s Democrat presidential debate just might be interesting.  So I watched it from start to finish…which I haven’t done for any of the earlier ones.

And it did not disappoint.  A recap and some observations…

Democrats substituted one old, white billionaire for another.  Tom Steyer was told to wait in the car and Mini-Mike Bloomberg hopped up on his soapbox…in retrospect, probably wishing he’d stayed in the car with Tom.

Mini-Mike got the opening question.  Seconds into his answer, Lizzy Warren started doing her Donkey imitation from Shrek; pumping her hand feverishly in the air signaling, “Pick me!  Pick me!”

She was clearly loaded for bear, and hit Mini-Mike right between the eyes…

“I’d like to talk about who we’re running against,” she said as soon as Mini-Mike was finished.  “A billionaire who calls women ‘fat broads’ and ‘horse-faced lesbians.’  And no, I’m not talking about Donald Trump, I’m talking about Mayor Bloomberg.”

And it was pretty much all downhill for Mini-Mike from there…though he did get a good shot in at Bernie Sanders later on by pointing out the hypocrisy of “the best-known socialist in the country” being a millionaire who owns three houses.  (Go Bernie, go!)

Warren landed a number of haymakers on Mini-Mike and others, but not enough to derail Sanders, who right now has Big Mo’ behind him…especially since Nevada Democrats OK’d early voting for their caucus and the vast majority of voters had already cast their ballots before last night’s debate.

Joe Biden’s “I’m the only guy…” schtick ain’t resonating.  It’s as old and tired as he is.  And despite being the early odds-on favorite, he’s toast in Nevada.  And his “firewall” in South Carolina is quickly crumbling.

The ever-condescending neophyte, Pete BootyEdge – apparently stung by jokes about him looking like Beaver Cleaver – decided to go with the Dick Nixon “Five O’clock Shadow” look.  Alas, it didn’t make him look older and wiser.  Just looked like he needed a shave.

Other than Mini-Mike, the other big loser was Amy! Klobuchar.  After her victorious, um, THIRD PLACE finish in New Hampshire, she hoped to keep a little Big Mo’ going herself and become the consensus “moderate” (what a joke) alternative to Bernie.

Alas, Amy! didn’t even bring a knife to this gunfight.  She brought a feather.  Yes, she and BootyEdge got into a few scraps, but it was like watching two toddlers squabbling over the wishbone at the kiddie table during Thanksgiving dinner.

Now, from a Nevada perspective the other big loser was our own King of Fake News, blogger “Jihadi” Jon Ralston.

Jon has always thought himself the Khan Noonien Singh of the media here: A superior intellect.  And he’s quietly seethed for years as he not only got bounced from one Nevada media outlet after another, but had to watch his “lessers” move on to gigs in “The Big Show” in DC.

Last night was the long-pursued audition on the national stage this Pavlov’s dog has salivated after.  And indeed, leading up to the debate the little blogger that couldn’t was promoting himself as being the “moderator.”

What he ended up being for two hours was a potted plant.

Some 55 minutes into the debate, Lester Holt finally turned to Jon and said, “You’re on.”

Jonny Boy started off with what he obviously thought was a clever joke.  Which bombed.  The guy’s as funny as a heart attack (no offense, Bernie).

Blogger Jon then read, haltingly and nervously, his question – which essentially asked the candidates about, um, global warming in Las Vegas…which is, um, a desert.

He told the candidates that it’s getting hotter here and that we’re in an “emergency situation,” especially for “tourists walking up and down the Strip.”

“Let me start with you, Mr. Vice President,” Nevada’s #2 liberal blogger said, “What specific policies would you implement that would keep Las Vegas livable?”

Seriously?  People have been living in Las Vegas, with summer temps routinely in triple digits, since the days of Bugsy Siegel.  And that was BEFORE central air conditioning.  And THAT’S the “issue important to Nevada” Ralston asked about?

Talk about laying an egg.

Fortunately, Chuck Todd jumped in and cut off Jon’s oh-so-earnest “I think I can! I think I can!” questioning.  And Ralston was never heard from again.  His less-than-five minutes of fame were up.  Back to the JV squad, Blogger!

Of course, the BIG winner of the Las Vegas Democrat debate was President Donald Trump.  As Mini-Mike declared, speaking about the front-running socialist Sanders…

“I don’t think there’s any chance of the senator beating Donald Trump,” adding, “I can’t think of a way that would make it easier for Donald Trump to get reelected than listening to this conversation.”

What he said.  And the beat goes on.

Oh, and just checking: Has anyone let Steyer out of the car yet?